Aston Villa have parted ways with Ally Samatta after only eight months at Villa Park.

The Tanzania captain joined Villa from Genk in January on a four-and-a-half-year contract and scored two goals in 16 appearances in all competitions under Dean Smith.

Samatta was unable to discover his early promise in a Villa shirt as Project Restart got underway following the Premier League’s Coronavirus break. For the first time in 25 years, no Villa forward or midfielder has scored a single goal after nine consecutive Premier League games that had preceded a 3-0 loss to Manchester United.

Smith’s side would eventually survive on the last day of the season and not without Samatta’s application and tireless running despite being stripped of the same confidence that had won him plenty of personal accolades abroad.

Villa have been keen to bolster their attacking ranks during this summer’s window with record signing Ollie Watkins joining from Brentford and forward Bertrand Traore both starting enjoying some goal-scoring form in League Cup ties, racking up three goals between themselves in two ties. Samatta has since fallen down the pecking order.

A move to Turkey has been touted for some time, and for Samagoal – who boasts an impressive goal a game ratio in the Champions League – a move to Fenerbahçe ticks all the boxes for a player carrying the weight of a nation on his back.

“I know how big a club Fenerbahce is. Not only in Turkey but a club known and weight in the world,” Samatta also said upon joining the Süper Lig club.

“I am happy to be here in such a family because it will be a new and big challenge for me.

“Fenerbahce has a lot of supporters and they always want to win. I also want to win. I came with this request, I am very happy and I hope we will win many trophies.”

Fans back in Samatta’s native Tanzania – a country of almost 60 million people – took great pride in his move to the Premier League, even his Samagoal77 Instagram account has a follower count of 1.7 million.

It probably comes as no surprise that Samatta was awarded the Most Influential Young Tanzanian in a ranking poll by Avance Media following his first big move in Europe, to KRC Genk in 2015.

Following a season-ending blow to Wesley on New Year’s Day, Samatta was quickly drafted in to cover for attacking losses in a Villa team starved of goals, and despite winning at Turf Moor, had only recorded one win in ten away trips.

Whether it was a distraction at the time, a League Cup run was the saving grace of Villa’s season before the Coronavirus outbreak halted the Premier League campaign. After missing games against Brighton and Watford, Samatta was granted a work permit and so his place in Villa’s League Cup second leg against Leicester was a certainty.

Smith had been playing without a front man for four consecutive games before hosting Brendan Rodgers’ side for the third time last season. So when Samatta’s name was read out over the tannoy, it was a welcome the ‘Tanzanian king’ deserved.

Truth be told, the ?? reverberation of millions 7,000 miles away in Ally’s homeland would’ve been a scene to behold. His beloved supporters in Tanzania weren’t too bothered about the colours on his back but the name printed held all the hopes of a nation watching their ‘son’ on the big stage.

His fans were so eager to see a goal on his debut, they picked out Jack Grealish as the source of Villa’s goal-scoring woes.

“All fans from Tanzania I understand that all of you love me because I am your son,” Samatta told Goal Africa.

“I also know that you would like to see me perform well with my new team but, here, I am making a request in a very humble way; stop criticising or abusing my fellow teammates or the team.”

It wouldn’t take long for Samatta to net his first after fluffing a chance to grab a debut goal in the League Cup semi-final win over Leicester. While his duty in the cup was far from over, a Premier League debut would prove to be the record-breaking strike all in East Africa were waiting for.

The 27-year-old became the first Tanzanian to score in England’s top-flight and also the first player from the African nation to net on his debut. The power of social media captured the overwhelming celebrations of a crowd gathered in Tanzania to watch the occasion.

The nature of the goal was also rare from Villa’s point of view, as Samatta popped up with Villa’s first headed goal of the season against Bournemouth.

Samatta scored all types of goals for Genk in the season before he joined Villa. He scored 19 with his right foot, nine with his left and 14 headers. His aerial ability was one major reason Villa identified their new striker at the turn of the year given that Villa had produced the fifth most crosses in the Premier League without scoring a header from the 470 crosses they’d produced before Samatta’s arrival.

What Samatta will be remembered for

His consolation goal at the Vitality Stadium would’ve been a personal highlight for Samatta but not many moments in his career will dupe that of a League Cup final goal under the Wembley arch. It was the goal Villa’s recruitment team had dreamed of – a powerful diving header to clinically dispatch Anwar El Ghazi’s looping delivery.

As the Premier League’s suspension would soon loom, his goal at Wembley would become the final goal Villa fans would celebrate inside a stadium, and who knows the next time we’ll get that pleasure let alone in the national stadium.

Following his move to the Premier League, Samatta took over the reigns of NBA star Hasheem Thabeet as Tanzanian’s global sports icon. The 7ft 3in basketball player has enjoyed a successful career with teams such as the Portland Trail Blazers and Houston Rockets but, according to Tanzanian sports journalist Salah Jembe, has been overtaken by Samatta in terms of popularity in his country.

Samatta also became a popular figure in the Villa dressing room. He formed a good friendship with fellow African, Marvelous Nakamba who also shoulders the pressure of a nation. The Zimbabwe international, according to Samatta knows the struggles of making it as a professional from humble beginnings.

The two had met before when they competed against each other in the Belgian top-flight league, and during a Q&A with the club’s fans on Villa TV, Villa’s former striker explained his relationship with Nakamba.

“I have a few, but I will go with Marvelous Nakamba. He is a guy I meet outside the pitch as well,” Samatta said.

“He is a cool guy, he comes from Zimbabwe, and I come from Tanzania, it’s not far away. He knows the culture, and he knows the struggle.”

Born in Dar Es Salaam, Tanzania, the striker who began his professional career in 2016 had been plying his trade in his home continent for six years, spending a year in Tanzania with Simba Sports Club – one of two vastly superior football clubs in Eastern Africa.

He scored 12 goals in 25 appearances and after finding success in his homeland, Samatta moved over 1,000 miles through Zambia to sign for TP Mazembe – the 17 times Vodacom Ligue 1 champions in the Democratic Republic of the Congo. Samatta scored 60 goals in 103 matches for Mazembe before making it in Europe.

He was named the 2015 African based Player of the Year and finished the season as the top goalscorer of the CAF Champions League as he helped TP Mazembe to win their third title since the turn of the millennium.

Samatta was the subject of interest from many European clubs. He eventually settled on KRC Genk who has produced talents Leon Bailey, Sergej Milinkovic-Savic and Wilfred Ndidi in past years and in May 2019, Samatta was awarded the Ebony Shoe award – with previous winners Youri Tielemans, Romelu Lukaku and Marouane Fellaini all forging successful careers in the English top flight.

While Samatta’s short stint at Villa won’t be remembered for goals nor particularly outstanding performances, he’s put Tanzania on the map – and that is a priceless legacy to lead in Africa. 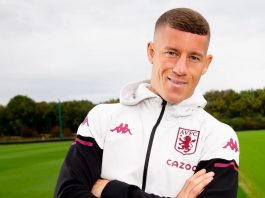