An unfamiliar wave of optimism has swept across Bodymoor Heath this week after Aston Villa claimed their first win ten attempts and possibly their most important of the season against Crystal Palace on Sunday.

Before West Ham face Watford in a game that will have a major bearing on the relegation picture, Villa will be targeting points against an underperforming Everton side with only one home win since the restart of the Premier League season.

Villa have only won eight games all season and in doing so have claimed a Premier League record of becoming the first side to win a league game on every day of the week in a single campaign. Having completed the league double over Norwich in December, Villa will be looking to add Carlo Ancelotti’s Everton to a short list of six-point scalps.

Behind enemy lines, I caught up with Adam Partington, videographer and author at GrandOldTeam – one of Everton’s biggest fan media channels – to discuss Aston Villa’s trip to Goodison Park this Thursday.

Before the Premier League’s resumption, Ancelotti’s blues had won five and scored 17 goals during an impressive start to life on Merseyside after Everton parting ways with Marco Silva in December. Lockdown murmurs of an assault on the top six have however proven futile.

Adam wasn’t getting carried despite only being only six points off Premier League high flyers Wolves before the restart.

“I was always sceptical of having an eye on Europe,” he explained.

“I didn’t think we’d have enough in the tank, I said in one of my videos that Europe would be a bit of a bridge too far for this side and that’s nothing to do with Ancelotti.

“He can only do so much, I just don’t think we have the footballers available to get on a good run.

“The overriding feeling at the moment is that we all just want the season to finish so we can get a couple of players out the door because we’ve got plenty of them around on big contracts, Gylfi Sigurdsson and players like that.

“We’re just all desperate to see this season end. I think the Evertonian fanbase was the most in favour of voiding the rest of the season for obvious reasons… because of those reds!”

The Toffees have struggled to get out a recent sticky patch that’s yielded just two points out of a possible nine – only scoring once in that time. Evertonians aren’t going to sugarcoat what could be a very disappointing ending to the season.

“What was most apparent in the Wolves game was that most of the lads were already on their holidays.

“So from his perspective and others as well, he knows he’s not in the long term plan.”

The disparity between needing a result and just playing for pride couldn’t be greater as Villa travel to Everton this Thursday evening.

Ancelotti’s side fell to a 3-0 drubbing at Molineux partly for a lack of quality, but mostly for a lack of trying, and Villa will be hoping their commitment to the cause can make up for some quality deficiencies in parts.

“The reason why I expect Aston Villa to win the game is because you have something to play for, Everton don’t.

“A lot of our lads are going through the motions and if the Wolves game is anything to go by – who are obviously a better team than Everton – you can tell they had a desire and something to play for and that counts for an awful lot.

“It depends on Villa, if they want it enough they’ll win the game. I expect you to win!”

Playing behind closed doors has become the norm in the past month or so, but amongst Everton fans, they feel their players are getting too comfortable without the Gwladys Street Stand offering some rousing encouragement .

“I think there’s a similarity between Goodison and Villa Park, your fanbase can get on the players’ backs and get very moody, when the atmosphere in these grounds is good, it’s brilliant but when it turns they’re aren’t very nice places to be when you’re so close to the pitch.

“I think it works both ways for Everton, at the start of Project Restart like in the derby against Liverpool, I think it worked in Everton’s favour actually which is ironic because before the game I thought it was a massive hindrance having no home supporters at the ground.

“The difference is, we probably couldn’t have got away with that result with Evertonians in the stadium, but overall I think it’s a hindrance because some players feel like they can get away with just strolling around instead of being screamed at to get moving.”

If the Goodison faithful can’t jee up a spiritless Everton side low on confidence and frankly commitment, there aren’t too many leaders on the pitch to make a difference either.

“They’re certainly not getting that from within the side, Everton don’t really have any leaders.

“There’s no-one really there who can take the game by the scruff of the neck and get the players going and that’s certainly another advantage for you, and it’s another reason why I feel you might win.”

Lacking leadership in a dressing room that’s all but down tools in recent weeks, for Villa this seems like a real opportunity to get a result having already seen off Palace – a side comfortable and ready to plan for next season.

Jordan Pickford’s cringy smirk after saving his own blushes on the goal line didn’t go down too well for Evertonians all too accustomed to Pickford’s antics after only a handful of decent performances this season.

His ‘number one’ position with England and a possible EURO 2021 starting place is becoming increasingly untenable.

“I think you’ve got a better goalkeeper in Tom Heaton and there’s a whole host of ‘keepers in the Premier League currently that have started to threaten his position now.

“We were 2-0 down and he’s smiling, he doesn’t learn either, he’s still riding on the World Cup which is fair enough because it’s a big deal for the country, but it’s gone past that a little bit now, in fact I’d be more than happy if Everton chopped him and he could make way for someone else.”

Pickford has been a mainstay in the Everton side this season despite causing some unrest in front of a back four that’s been chopped and changed somewhat under three different gaffers this campaign.

“Ancelotti tends to use a 4-4-2 formation but I can see why he went for a different system at Wolves, we tried to make it as compact as possible without giving them too much space.

“It was very interesting to see how we started because we had Lucas Digne and Leighton Baines on the team sheet but it soon became quite apparent that we were going to set up pretty much in a back five to nullify the threat of Wolves.”

For the visit of Dean Smith’s side, the Italian will no doubt tinker with his tactics once more.

“It’s tough to see what we’ll do for Villa, it depends on a whole host of things, if Mason Holgate is fit then we could go with a 4-4-2 but it’s impossible to say with Yerry Mina going off against Wolves too – I think Ancelotti will be more inclined to play in a different way against your lot.

“We have no energy in the midfield so I’m not sure how much a 4-4-2 actually works, you usually get a stupid amount of space between your midfielders and your forwards.

“Davies and Sigurdsson just sit in and he’ll play Gordon in a wider position but what we tend to do in that formation is just bypass the midfield as much as we can.

“We’ll go direct to Calvert-Lewin or Richarlison and try not to give our centre midfielders the ball because they don’t tend to retain it, we end up giving it away and they’re not very good at winning it back either.

“For a side that’s spent so much money we just don’t have any excuses anymore, we didn’t spend under Moyes but recently we’ve spent so much on absolute tosh and to put out the midfield that we do now, it just sums up our bad management, but hopefully that’ll change.”

Where the game will be won and lost

Everton have splashed over £400m since Villa lost their ever present record from the Premier League, but the £35m set aside for Richarlison has been a worthwhile investment.

“Richarlison is on the brink of being world class and I think other fans are starting to realise it, he can definitely be the game changer.”

Behind the Brazilian, Everton’s problems have been laid bare with a midfield balance severely lacking this season.

“The game won’t be won for us in midfield that’s for certain, we’re very, very poor in that area of the park. 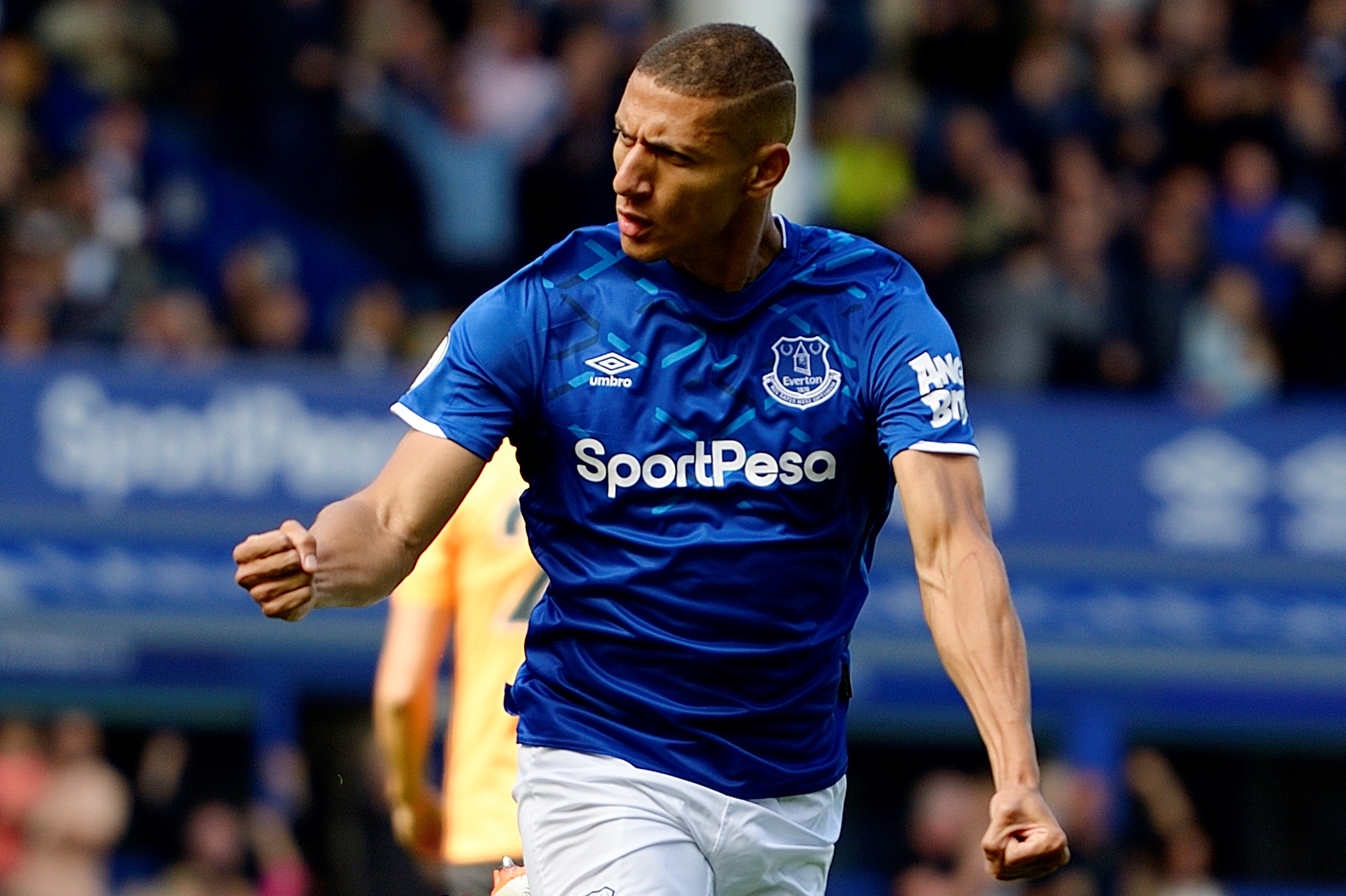 “We’ve got an almost world class forward in Richarlison and Dominic Calvert-Lewin can cause you issues, Moise Kean not so much. We’ve got decent defenders as well, Lucas Digne is one of the best full backs in the league at the moment, Michael Keane has been in decent form, Mason Holgate, if he’s fit has been terrific too.

“If we are going to win it’ll be through Richarlison getting us out of a hole or something – just that extra bit of class as you start to tire he can be very clever and win it from there.

Mid-table security is hardly the return on investment Farhad Moshiri was looking for when he took control of the club a couple of seasons ago. Despite Financial Fair Play concerns, Everton’s hierarchy will be looking to improve an ageing squad come August.

“I’m not sure what I’m expecting this summer because Everton have to adhere to the financial fair play rules.

“Everton have been spending a lot of money for quite a few seasons and haven’t quite yielded anything from it, so we’ve got to be careful of that.

“With that being said, I think they will try and make something happen because I don’t think they have a lot of choice. If you bring in a manager like Ancelotti, he’s not going to come unless he’s had clear assurances of getting the support that’s needed, so I expect some sort of transfer activity.

Villa know if they can get a result on Merseyside, survival will remain a distinct possibility. Leaving empty handed wouldn’t all together rule out Premier League football next season, but Smith’s side would have to win both remaining games against Arsenal and West Ham to stand a chance.