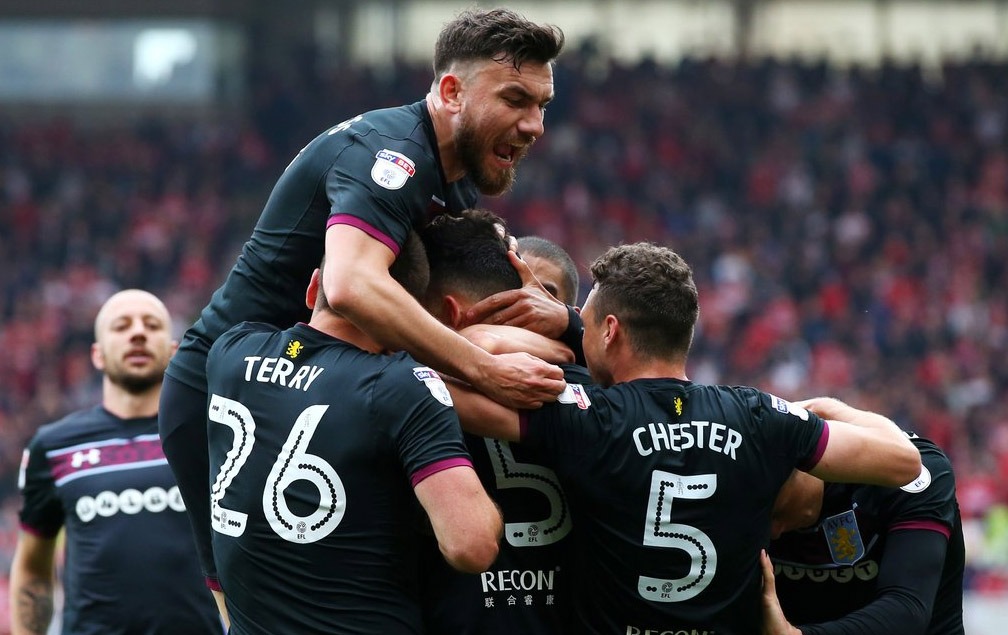 Aston Villa gained the advantaged after the first league of the Championship playoffs following a win over Tony Pulis’ Middlesbrough at the Riverside this evening.

Steve Bruce rested eight players in the 1-0 defeat to Millwall last weekend with one eye on this game and those players returned as expected.

Mile Jedinak was opted for over Glenn Whelan and Birkir Bjarnason in the defensive midfield role otherwise it was as you would expect for the boys in Claret and Blue.

Pulis’ sides are known for how good they can be attacking and defending set-pieces so he would have been furious when Villa scored the only goal of the game from a corner after 15 minutes.

Jack Grealish sent in an inswinging ball from the corner to find Jedinak at the near post who guided the ball past Darren Randolph to give the visitors the lead.

Villa should have doubled their lead just before half-time when Robert Snodgrass’ curling effort looked certain to hit the bottom corner but Randolph somehow turned the ball onto the post.

Middlesbrough pushed for an equaliser and dominated the majority of the play in the second half but suffered a blow when defender Daniel Ayala was forced off with a leg injury.

Fabio replaced Ayala and soon gifted his side a great chance to level when he crossed a ball across the six-yard line but it ran behind Britt Assombalonga who would have had a simple tap-in.

Middlesbrough introduced Patrick Bamford late on in search of an equaliser but it wasn’t to be meaning it was the first time they had failed to score in nearly three months.

Villa suffered a late blow of their own when full-back Ahmed Elmohamady looked to pull a hamstring meaning he is unlikely to be available for the second leg at Villa Park in three days.

Credit where its due, Bruce got it spot on and you could even say Pulis got ‘Pulised‘ but the job is far from over. It is only half time and Middlesbrough won’t roll over and die when they visit Villa Park on Tuesday night. A special mention has to go to Alan Hutton who had a fantastic game keeping former Villa winger Adama Traore quiet.

So far so good for Villa but there is so much more work to be done.

Steve Bruce: “We had to defend very well. We went too deep in the second half but you saw the resilience of the team. It was very difficult but we kept a clean sheet and we’ve got an advantage. It’s never easy but we’ll take that and we’ll look forward to Tuesday.”

Tony Pulis: “We’re disappointed because the goal has come from a set-play. We’ve worked on small details this week and for them to score like that was disappointing, but you can’t fault the players because they really worked hard today.”