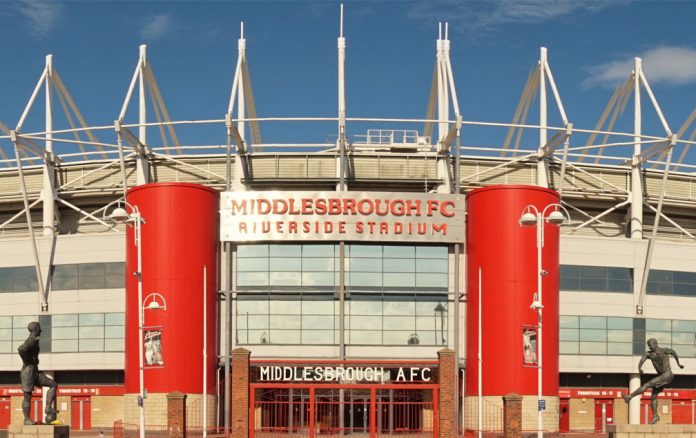 Like all away games, Aston Villa has once again sold their full allocation of 2,524 for the trip to the Riverside Stadium to take on Middlesbrough.

The Riverside Stadium has been the home to Middlesbrough since it was built and opened in 1995. The stadium replaced their old home, Ayresome Park and cost £16 million to build.

The stadium is completely enclosed after the opening corners were filled in, in 1998. All stands are two-tiered apart from the strange looking West Stand that has three tiers. It kind of makes the stadium look unbalanced. The ground has a capacity of 34,100.

The away supporters are located in the East side of the stadium and they can access the stadium at turnstiles 53-61. Just under 3,000 fans can be housed in this area.

Once inside the stadium, the legroom is OK and the views are great – as you would expect with a modern style football ground.

Your usual food options are available including their very own ‘Parmo in a bun’. This is apparently inspired by the local dish that consists mostly of chicken in breadcrumbs, creamy sauce and cheese.

The Riverside Stadium has a visitor guide on the official Middlesbrough website. You can view the .pdf here.

There are very little in the way of pubs in and around the Riverside so you are best of heading to the town centre.

The main pub for away supporters is Doctor Browns which is about a 10 minute walk away from the stadium at the bottom of Corporation Street. The pub is famous for its real ale, offers Sky TV and is known to have a mixture of home and away supporters.

Leave the A1 (M) at junction 49, signposted to Teesside, and join the A168, which after approximately 11 miles will become the A19. Approximately 19 miles later take the A66 eastbound towards Middlesbrough town centre. Stay on A66 past the town centre (on your right) and follow signs to the stadium, which you will see on your left.

A train from Birmingham to Middlesbrough will take around 4 and half hours.Middlesbrough train Station is located on Albert Road which is a 10 to 15 minutes’ walk from the Riverside.

Matchday Parking at the Stadium is only available to permit holders. Both home and away fans are able to purchase permits by calling the ticket office on 0844 499 1234* (subject to availability).

If you do not have a permit, you are advised to use town centre parking. The town has 3558 long stay parking spaces, which give you plenty of options to leave your car whilst watching the match.

You are advised to use the town centre car parks as enforcement action will be taken against cars parked illegally or unsafely in areas around the stadium.

For further details on where to park on a matchday please visit http://visitmiddlesbrough.com/visitor-info/football