Fernando Forestieri grabbed an 85th minute winner after he was gifted the ball by Pierluigi Gollini in Villa’s first game of the season.

Bruce’s boys welcome Sheffield Wednesday to Villa Park tomorrow when the hosts will be looking to bounce back from Tuesday night’s defeat to Huddersfield Town.

The Villans’ home record has been outstanding this season, only losing two games on their own turf. Although the season is petering out with not much to play for for the Villans, the manager will be keen for his side to keep a good run going and build for next season.

Having scored in all but one home game this year, Villa’s success is built on the goal-scoring ability. Jonathan Kodjia has been influential in instilling the winning mentality that the side has built up at Villa Park in recent months and his pace and power will, once again, be traits the Villans will be relying on tomorrow afternoon.

The Ivory Coast international has the ability to win a match on his own – and he has shown that on numerous occasions this season. At times, he can annoy fans with his selfish nature but he has certainly proven his worth. .

The Owls will arrive disappointed that they didn’t manage to defeat the relegation-threatened Burton Albion on Tuesday, only taking a point from an encounter that they would have earmarked as being one that they could win and thereby consolidate their place in the play-offs.

The Owls have had a brilliant season once again after last season’s disappointment of losing out to Steve Bruce’s Hull City in the play-off final. Carlos Carvalhal’s players have delivered with their hard working, never say die attitude and they will be intent on doing the double over Villa to keep their promotion push going.

Midfielder Leandro Bacuna is serving the fourth game of his six-match ban for pushing a match official in the victory against Derby County so will once again be missing.

For the visitors, Almen Abdi and Sam Hutchinson are both set to return after missing Tuesday’s draw, although they could be start on the bench. 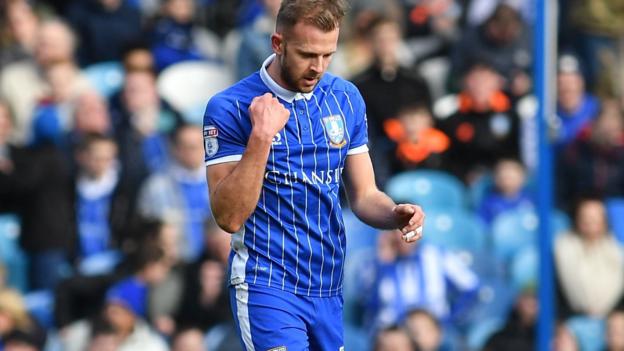 A proven Championship goal-scorer, Jordan Rhodes has impressed in the Steel City since joining from Middlesbrough in January.

Aston Villa Football Club was linked with Rhodes in January before electing to sign Hogan instead. Rhodes is an exceptional talent who would get into most teams in the division.

Predatory in front of goal and with the ability to be in the right place at the right time, the Englishman is a very dangerous player to play against.

James Chester and Nathan Baker have been impressive in recent weeks and they will need to replicate their recent form on Saturday if they are to stop Rhodes from dictating the direction of the game.