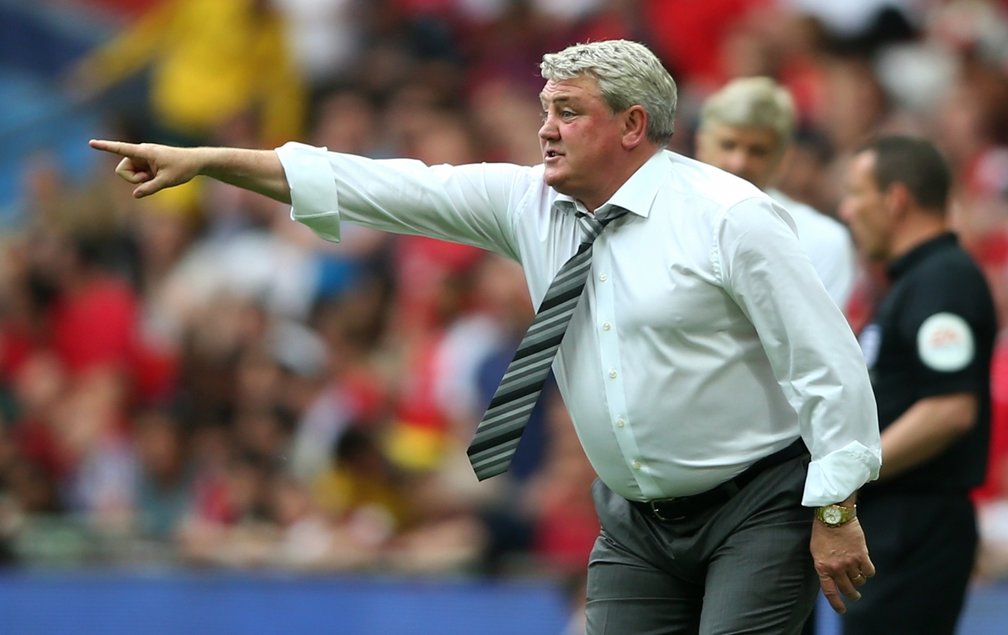 It might not be nice to see him, to see him nice for all Aston Villa fans but it is looking increasing likely that Steve Bruce is the man who will be tasked with the job of getting our return to the Premier League back on track.

Alan Shearer and Steve Bruce have confirmed that club officials made contact with the former Manchester United captain about succeeding the recently sacked Roberto Di Matteo at Villa Park. On ‘Goals on Sunday’ earlier today, Bruce described the Villa job as a “terrific” one at “one of the big clubs of this country” and said that he is “hoping to hear something this week”.

With the potential appointment of Bruce there is a big elephant in the boardroom in the shape of his history with Birmingham City both as a player and, for almost six years, the manager.

During his time with Birmingham City, he was twice the overseer of promotion to the Premier League. After getting the club promoted in his first season, via the play-offs, perhaps against the odds, he kept the Blues competitive in the Premier League (sometimes too competitive for our liking) for four seasons before falling back into the Championship.

Despite the setback and a poor start to the Championship season leading to calls for his head at around this time in 2006, calls which were ignored by the City hierarchy, a recovery ensued and he again ensured a safe passage back to the Premier League, this time securing automatic promotion. This should open our eyes to how open, unpredictable and changeable this league can be and remind us that the Villans still have a huge number of points to play for this season.

It is worth noting that Bruce only left St. Andrew’s because he was poached by Wigan Athletic; this coincided with the purchase of Birmingham City by the hairdresser Carson Yeung.

After keeping the Latics in the league and helping them to a respectable mid-table position, perhaps above expectations, he again found himself headhunted, this time by Sunderland.

Life at the Stadium of Light was more difficult: whilst Bruce did not take the club down he did, at times, come close and in truth he perhaps struggled because of his reported support for the Black Cats’ local rivals Newcastle United. Nevertheless, his name has been linked in recent times with Sunderland following the side’s indifferent start to the season.

Six months after his departure from Sunderland, he moved on to Hull City. During his four years there he again achieved promotion to the Premier League on two occasions, sandwiched by a relegation to the Championship and a F.A. Cup final appearance. Again, it is fair to say he possibly overachieved in his time at the club. It is clear that Bruce is very much his own man; this is reflected by his resignation from the Tigers after winning promotion to the Premier League at the end of last season reportedly because of a lack of transfer funds.

Bruce’s glittering playing career included a haul of silverware. There is only really success in the Champions League missing from his impressive C.V. He was seen as a dependable, brave and no-nonsense defender. The teams he has managed have perhaps reflected that.

Some have pointed to his lack of success in the Premier League as a manager. However, this needs to be considered in the context of the clubs he managed and with the money he had to spend in mind. Furthermore, we cannot run before we can walk: our objective is to get back to the Premier League. Only then can we worry about being successful in it.

Ultimately, with this appointment, Xia et al should be looking for someone who has been there, done that and got the XXL t-shirt. Joking aside, all that matters at the minute is that Bruce is someone who has the ability to get a club promoted from the Championship. We need a manager who can ensure that the Villa team is organised and playing in a fashion that can get the promotion campaign back on track so I for one am prepared to ignore his history down the road, especially if he can engineer a victory there in a few weeks’ time!