Born in Great Barr, Jacob and younger brother, Aaron have become key members of Villa’s reserve set-up after both joining Villa as schoolboys.

As Dean Smith’s senior side prepares for the upcoming Premier League campaign, Jacob and Aaron both traveled to the Emirates as Arsenal played host for Villa’s third pre-season friendly before their September 21 league kick-off.

Jacob scored twice on Saturday as Mikel Arteta’s Arsenal fell to a 3-2 defeat to a Villa side without captain Jack Grealish, Tyrone Mings, John McGinn and Conor Hourihane.

The 18-year old who joined Villa’s academy at the age of six, penned a ‘long-term’ professional contract with the club last year. His deal was the first handed to a promising youngster as Villa have sought to restructure their academy operations over the past months.

Former academy manager Sean Kimberley, who had overseen Ramsey’s rise from schoolboy to professional player, says: “If he continues to match his undoubted technical ability and eye for a goal with the desire and energy to reach the next level, he will have a bright future in the game.”

Ramsey has excellent footwork as well as a turn of pace and an eye for a pass, he holds all the typical traits of an attack-minded midfielder. His eye for a goal has particularly been the cause for optimism around his quickly developing game.

In the 16 Premier League U18 appearances he made in the 2017-18 season, Ramsey made ten goal contributions, scoring seven goals. In the following campaign, his game went up another level, scoring eight goals in 13 games, including two braces against Swansea and Reading in the FA Youth Cup.

Ramsey showed off his technical prowess, speed and goal scoring ability to score a wonder-goal against the Royals which went viral on social media. He also found the net twice as he made his debut U23 season in Premier League 2 in 2018.

He continued his impressive form by contributing to 11 goals in 12 PL2 games last season, but after Villa went out of the FA Cup in December, Ramsey’s chances of featuring again in the first team during the Premier League run-in were slim. Doncaster, who are managed by Smith’s friend Darren Moore, offered him not only game-time but a chance to prove himself in senior football as the Donny launched their League One play-off bid.

Football’s indefinite suspension during the Coronavirus outbreak postponed Ramsey’s progression under Moore. He was making great strides in League One after making the odd cameo for Villa’s first team last season.

Boss Dean Smith has high hopes for the talented teenager who made his first-team bow in a 2-0 defeat to West Brom in 2019. Ramsey later featured this season in Villa’s Carabao Cup third round tie against Brighton – his first senior appearance last season.

Ramsey was later named on the substitute’s bench by Smith when Villa lost 2-1 at Craven Cottage in the third round of the FA Cup in January. He came on to make his third appearance for Villa in the 86th minute, and at the end of the month, Ramsey joined Doncaster on deadline day.

On his debut for the Rovers, Ramsey scored twice against Tranmere, before scoring in his seventh and final game for the club against MK Dons in March prior to the league’s suspension amid the global health crisis. 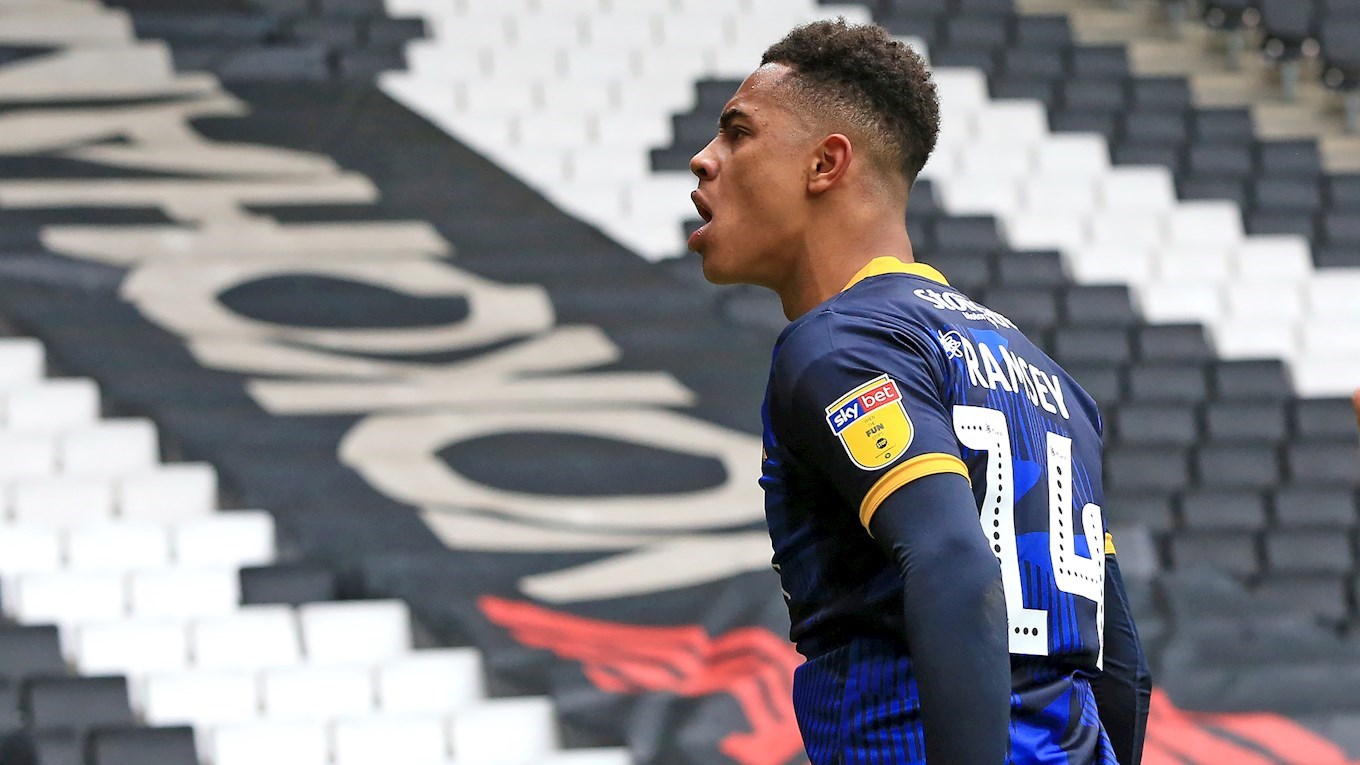 He impressed at the Keepmoat and at such a tender age, that he even drew comparisons to a former Villa great. The former West Brom defender and current Doncaster manager, Moore had been discussing Ramsey’s impact with the Doncaster Free Press and compared the teen to former Villa star David Platt.

“He’s a very good player. He added that bit more power to the midfield,” Moore said.

“He’s a goalscoring midfielder. If you’ve got that at this level, it helps a lot. It takes a bit of pressure off the forwards and it gives the opposition something else to worry about.

“He was almost David Platt-esque how he arrived late in the box. It’s an unbelievable skill that he’s got to arrive late.

“He’s got the power to get off the back of people and come in from deep to create overloads.”

Platt spent three years at Villa, scoring 64 goals for the club and winning the PFA Players’ Player of the Year in 1989-90 – it’s high praise from the coach he spent three months with.

Villa boss Smith has too sung his praises, and reportedly views Ramsey as a potential first-team squad member next season: “I keep moving JJ up in training as often as I can to give him that experience. He’s had a bit of a growth spurt as well so we have to be mindful of that too.”

Many of Villa’s young hopefuls will make the step-up from U18 to U23 football next season as Villa endeavour to fast-track the development of their promising stars. Jacob is physically maturing into a very capable midfielder ahead of a U23 campaign that could see him matching up against players five years his senior.

He used to be a diminutive figure in Villa’s U23 side, but recently shot up. His physique is developing with regular strength and conditioning work as Villa continues to closely monitor his progress with the club’s sports scientists keeping an eye on his development.

Jacob has two brothers: Aaron, 17, who has made a big impression and recently captained England under-17s, and Cole, 13, who is developing further down the age groups at Bodymoor Heath.

Three Ramsey’s in one Villa team of the future is quite a thought and they’re already a third of the way there with Jacob turning professional last year. There is some friendly debate over who is the most talented footballer in the family.

Aaron is one of the standout players in Villa’s U16s and hopes to join Jacob in the professional ranks before too long. If Aaron makes it, the Ramsey’s could become the second pair of Brummie Brothers to play for Villa after the turn of the millennium – Luke Moore and Stefan Moore both came through the academy around 2005.

England officials at St. George’s Park have also recognised Aaron’s potential and recently handed him the captain’s armband in a 2-0 win for the under-17s over Czech Republic in November. He played alongside the likes of Louie Barry, who Villa snapped up from Barcelona, Alex Robertson of Manchester City and Bayern Munich’s City’s Jamal Musiala.

Aaron plays in a slightly deeper midfield role for the under-18s, and followed the early career path of Jacob. He started out at local team FC Premier and was also spotted by Villa at an early age.

The two brothers, having grown up just a short way away from Villa Park in Great Barr will be dreaming of hearing the Holte End sing ‘they’re one of our own’ in years to come. Aaron’s been a regular with England through the age groups and will challenge his brother for a place in Villa’s first team in coming seasons.

Louie Barry can become Aston Villa’s No.9 for many years to come