Aston Villa have been busy restructuring recruitment and youth development operations over recent weeks as the club begins to lay the foundations for NSWE’s exciting plans.

Behind the scenes Villa are quickly becoming a more forward-thinking Premier League club with a long-term, thorough blueprint in place. Whilst only time will tell if Lange can replicate his youth recruitment successes or if Mackenzie can scout the next N’Golo Kanté, Riyad Mahrez or Son Heung-min, Villa are certainly investing in the right areas.

According to reports, the club might be looking to expand their resources further than Birmingham, through a model that many top clubs across Europe are starting to adopt.

Chelsea, Manchester City, Leicester City and Watford have all become trailblazers of the sister club model. The duo-club partnership can profit a Premier League club in many ways, from allowing inexperienced youngsters to leave on loan or gain a work permit, exchanging players or even due to merchandising reasons – the partnership has many advantages.

According to Reuters in 2019, Villa’s co-owner Edens and his investment group had launched a bid to buy Lange’s former club FC Copenhagen.

The Fortress Investment Group were apparently in talks to buy a stake in Denmark’s most successful domestic team who had been regularly qualifying for the Champions League in the past decade.

It’s evident that Villa’s ownership party were keen to replicate Copenhagen’s domestic and European success story, which is founded on the excellent recruitment policies and youth development strategies employed for many a year in Denmark. Lange’s recent appointment at Villa should come as no surprise considering the reported admiration Villa’s hierarchy have in FCK’s football operations.

Even before Villa’s new owners bought the club off Dr. Tony Xia in 2018, the Chinese businessman was looking to expand the club by developing feeder clubs in India, China and the USA, according to the Express and Star.

Xia was hopeful of building up a network of affiliated clubs, which would be an integral part of his global plan for Villa’s brand. Whilst his rash ownership style eventually came to blows, Xia, like many other owners in English football were eyeing new ways to replicate the successes of Roman Abramovich and Sheikh Mansour.

Chelsea and Manchester City have both established a global brand in a handful of countries by building relationships with clubs based in Europe, America and Australia.

City Football Group – who own Manchester City – employ over 2,000 staff members who oversee more than 1,500 footballers who play 2,500 games a year for CFG’s eight clubs across Europe, North and South America, Australasia and Asia.

Managing director at CFG, Brian Marwood was keen to make his global football project a reality when he joined the organisation.

“In 2013 we had this concept of a global approach and looked at other clubs that would join City Football Group,” Marwood told The Guardian.

“The majority of my staff are within scouting and recruitment. We try and apply consistency to all our clubs, use central methodology resources to work with the football directors, providing information, knowledge and reference points regarding what would be good choices for them.”

Sister clubs not only offer a chance for youngsters to develop, but develop to the requirements of the parent club. For Manchester City, coaching youngsters to the liking of Pep Guardiola while plying their trade at Girona or Melbourne City can be tricky.

Marwood said: “It’s interesting because 11 years ago when I first came here it was very hard to recruit talent. They saw us as another foreign-owned club that would go through a crazy period of uncertainty. But now, we’re regarded as a stable club that’s got great owners, an extremely supportive board.”

Last summer, Villa took Douglas Luiz away from the Etihad and whilst it took the young Brazilian a little time to settle, the CFG identity couldn’t have been clearer on a player who shone in Villa’s bid for top-flight survival.

If Villa are to pair up with a feeder club, a style of play and tactical identity will have to be promoted by the club so footballers coming into and out of Bodymoor Heath are well versed in a certain brand of football and consistent culture.

Beyond on-field success, CFG’s remit is to develop players and even provide potential future managers for the group of clubs affiliated with Man City.

Marwood said: “The stats tell you one thing but the other aspect is: what is the person like? The person’s culture? We’re very keen to promote good values, behaviours, people that fit with our group. You don’t always get that but you should try.

“To understand the person is another element. If you have somebody in your house as a child and you develop them, you pretty much know after five, six, seven years what type of person they are. Then the ambition is that hopefully we can allow a great progression for them.”

One example of effective recruitment from Manchester City involved Patrick Vieira, who after earning his stripes in junior coaching programmes in America worked up to becoming New York City manager in 2016 before he left to take the role as Nice manager.

The Pro-Licence is the passport to elite management and coaching held by all Premier League managers who are required to have obtained the certificate earlier in their development as a coach.

Mandated by UEFA, the official governing body of European football, the UEFA Pro is the highest coaching certification available and follows the completion of UEFA ‘A’ and ‘B’ licences.

Mellberg has taken a different route having managed Helsingborgs IF since 2019, after stints with Brommapojkarna and Fremad Amager. His former centre-back partner at Villa, Martin Laursen admitted to BirminghamLive that teaming up with Mellberg to take charge of Villa in the future would be ‘something nice’, and added that maybe it’ll happen in the years to come.

“Olof is having a good career at the moment,” Laursen said.

“He’s done well as a manager at a club in Stockholm, now he’s in Helsingborg in Sweden. He’s very serious about his football so you never know maybe someday we’ll come.”

There’s no shortage of avenues Villa may want to go down to justify joining alliances with another football club, and with the direction that Sawiris and Edens plan to take Villa down, the club will be an exciting prospect for suitors interested in teaming up with NSWE.

Identifying the right club to partner

The Dutch Football Association has twice investigated the relationship between Vitesse Arnhem and Chelsea who are two of the more well-known ‘partners’ in European football. The Dutch FA found that although the original founder of the Vitesse purchase and current owner, Alexander Chigirinsky, is a friend and associate of Roman Abramovich, it was understood that there was no common management or ownership of the club.

Such a structure is prohibited by UEFA who has a restriction to protect sporting integrity.

Tomas Kalas, Mason Mount, Patrick van Aanholt, Lucas Piazon and Lewis Baker among others have all spent time in East Holland on loan deals with Vitesse. It’s common knowledge nowadays that Chelsea’s loan army will infrequently break into the Blues first-team squad, but instead make permanent switches elsewhere. Though this is no shortcoming of the feeder club system.

Vitesse is a fine starting point for players out of the Chelsea academy, but the step up from Eredivisie to Champions League contenders is too big. For Villa however, a club the size of Vitesse would suit Sawiris and Edens, with the gap between Villa and a mid-table European club ideal for a mutual relationship.

Vitória Guimarães S.C. have become the latest club to be linked with investment from Villa’s wealthy owners. 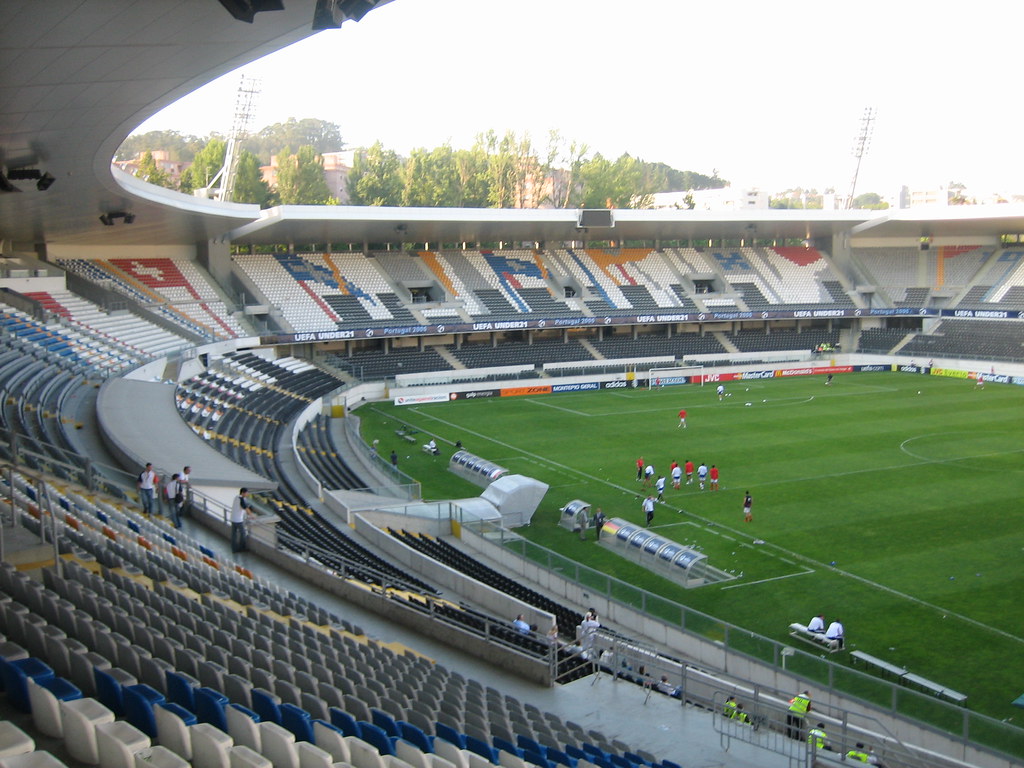 As reports surfaced that former Benfica manager Bruno Lage was to take over from Dean Smith at Villa Park following the club’s final day survival celebrations, the Portuguese media links were wide off the mark.

The reports were however carrying substance of sorts. Guardian journalist Paul Doyle reported that Sawiris was set to buy a stake in Portuguese club Vitória S.C, with Bruno Lage in the frame to become part of the coaching staff.

Tiago Mendes, recently Diego Simeone’s assistant at Atletico Madrid would later be installed as the Vitória’s head coach on a two-year deal, so the reports might not carry full truth. Though, Vitória’s recent transfer activity is fascinating.

This week, the Portuguese club announced the signing of South African prospect and promising forward, Lyle Foster. The 19-year-old was nominated for the prestigious Golden Boy award after a stellar campaign at former club AS Monaco last season. Though Foster wasn’t the first youngster Vitória have brought to Guimarães over the past year.

21-year-old Jacob Maddox, formerly of Chelsea and Cheltenham Town became the third highly-rated English youngster to join Vitória after Marcus Edwards and former Villa defender Easah Suliman. The trio were part of the same Three Lions side that won the U17 UEFA European Championships, defeating Portugal 2-1 in the final.

The defender, who left Villa in January, scored the opener in the 2017 final, and now Vitória are seeking to fast-track the time lost in the player’s development. Vitória last season narrowly missed out on European football after finishing 7th in the Primeira Liga, but the development of their newly recruited youngsters will be prioritised.

Whether Villa chooses to adopt a sister club or not, for the benefit of commercial activity or solely player development, it’s an avenue that more elite clubs are willing to go down, but meticulous planning will be required if Villa are to select the correct profile of club.

Who is Bertrand Traoré?