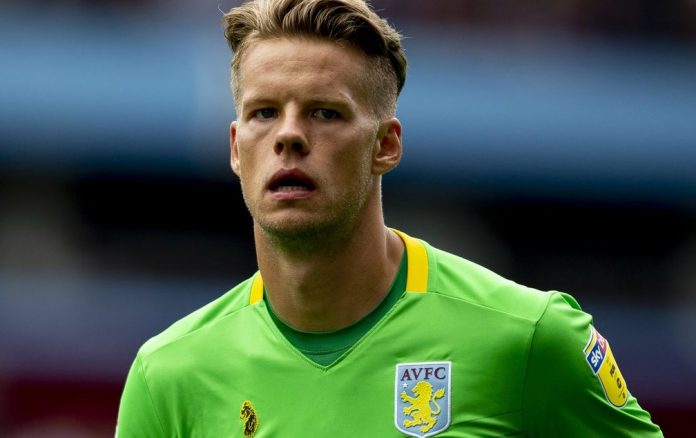 I am unsure if it is the case with all teams or just Villa but it does seem like there is always a player under focus from our fans. You know, someone who is identified as the weak link. The player who regularly makes the starting 11. That player who the fans don’t share the same belief in as the manager. In the past players like Joleon Lescott and Ashley Westwood spring to mind. Rightly or wrongly they were pinpointed by supporters. They are the kind of players who incites debate and conversation. Our goalkeeper, Orjan Nyland seems to be that player at the moment.

It didn’t seem necessary to purchase a goalkeeper when Villa did. Jed Steer started the season as our number one and he impressed against Hull. His career has been stop-start with Villa due to injuries. Steer had acquired regular experience during his loan spell with Huddersfield and picked up positive reviews. It appeared that his opportunity had finally arrived.

That was until Nyland and Andre Moreira (loan from Atletico Madrid) both arrived. Suddenly our squad was bloated with goalkeepers and Steer was allowed to join Charlton on loan. Manager at the time Steve Bruce was full of praise for Nyland. He stated “I think I’ve chased him for the best part of 4 years now” and “we’re quietly confident that we’ve got a very, very good goalkeeper”.

Fast forward to Bruce’s last game in charge and after several high profile errors, Nyland was dropped in favour of Mark Bunn. Since then he has started every game under Dean Smith. He is now working with our new goalkeeping coach, Neil Cutler. Is this through belief or a severe lack of good options?

There have been plenty of rumblings of uncertainty and it hasn’t stopped despite our turn-around in form. Nyland himself has even looked uncertain at times. He has looked like he has felt the pressure of the fans and expectations.

There is no doubt the goalkeeper has put in some good performances. His performance against Brentford and his fantastic save from a Jordan Hugill effort against Middlesbrough come to mind. He does, however, fall short when it comes to demanding his box. And he isn’t the first foreign goalkeeper to come to England and struggle on that front and he won’t be the last. A prime example would be the goal he conceded against Ipswich.

Given Villa’s high standards and with the transfer market due to open in a few weeks, it is no real surprise that we have been linked with other goalkeepers. Bookies have good odds on Villa recruiting a new keeper and you can get good odds with a Bet365 bonus code. Most noticeably Tom Heaton and Karl Darlow. Both are very experienced goalkeepers within the English game.

.The speculation will only increase as January gets closer, and if a new shot-stopper is bought in that would surely signal the end for Nyland’s Villa career. Regardless of your opinion on Nyland, it will be interesting to see how his Villa career takes shape in the coming months. Disappear like former keeper Pierluigi Gollini or thrive after a shaky start like Sam Johnstone.

How can Villa better use the loan system (and not let the system use them)?