With just one game left this season, we take a look at the top five Aston Villa players this season according to Whoscored.com.

It hasn’t been a thrilling season in the Championship for Steve Bruce’s men but there have been a few who have stood up and been counted. The stats are based on players who have played at least 15 games for Aston Villa this season.

Following a season out on loan at Bristol City last season, Nathan Baker has returned to Villa Park and formed a formidable partnership with James Chester. The 26-year-old defender averages 0.8 tackles, 1.4 interceptions and 8.1 clearances per game.

His powerful performances in the heart of the Villa defence have been highlighted by the new ‘Nathan Baker’s magic’ song that is sung at most games by the Villa faithful. 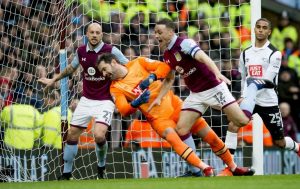 The 28-year-old defender averages 2.8 tackles, 3.1 interceptions and 5 clearances per game.

It is no real surprise that our Ivory Coast striker features in this list although some may have felt he should have been number 1. The 27-year-old was bought in from Bristol City in the summer as Villa looked to recruit some fire power.

The star striker, who is currently injured, has scored a very impressive 19 goals in in 36 Championship appearances for Aston Villa this season.

A forgotten man who is no longer at the club, Jordan Ayew makes it on the list in second place having made 21 appearances for Aston Villa this season. Maybe it is no real surprise that he is back in the Premiership.

The Ghana-born striker managed four assists and two goals during the first half of the season for Aston Villa according to whoscored.

The veteran former Crystal Palace midfielder is a big fan favourite with the Aston Villa faithful already and it’s no real surprise that he tops this list. His hard working gritty performances makes him the first name Steve Bruce should be putting on his team sheet each week.

The 32-year-old Australian defensive midfielder averages 2.1 tackles, 2.3 interceptions and 4.7 clearances per game. He has also chipped in with two assists for the Villans this season.

Do you agree with the Whoscored ratings? Let us know below or discuss it with fellow Villa fans on the Avillafan.com forums.